Well that wasn’t bad was it?! I know this piece is late but it has taken me this long to compose myself and re-watch the game with a clear mind in order to make this analysis, and I’m still not sure if I can do it. As a Mancunian there are not many better feelings than being able to walk into work the day after a derby and talking immeasurable amounts of shite to colleagues of a different persuasion. There are those days after grabbing a win in the last second, as we have done on occasion in the recent past (RvP at the Etihad, Owen at Old Trafford), they are all well and good, but there is nothing quite like the day after an absolute MAULING. Needless to say I didn’t get much work done on Monday. For that feeling alone I will always be thankful to Louis van Gaal, but this to him was just another part of the ‘process’… a process he has been banging on about since last summer, and we are not even half way there yet. I am pretty excited about the future now. We should all be. Louis van Gaal and his players have done a fantastic job of restoring our pride after the shame and embarrassment we had to endure last season, and the wins over Liverpool and City are the confirmation to the world that we are back… the real United are back. In every sense this was the Derby of Redemption, for the club as a whole but also for individuals such as Young, Fellaini, Smalling, Valencia… players who 12 months ago were being hung out to dry by fans including yours truly. So many heroes and so few villains to choose from this week, mainly from an emotional stand point because of the pride I have in each and every one of those players that took to the field; as usual however I will try to pick out some aspects that could be improved upon going forward into this new teams biggest test so far… Chelsea away.

You have all heard the superlatives for this guy, I can’t really add any more. He is the conductor of this team and it is little wonder that this line-up and formation started to work the moment he was reintroduced and surrounded with the right personnel. A 70% win rate with Carrick in the team supersedes even Sir Alex Ferguson’s win rate as manager. He is the most influential player in our squad and he showed that again on Sunday. A 92% passing accuracy with only 5 failed. 5 failed passes in 90 minutes of football! He shielded the back 4 in the way he always does, making 4 interceptions, all in that space between the penalty area and the half way line, no shock there but here is what was cool about it. Each one of his interceptions took place directly in front of each member of the back 4. He protected the right back, the right centre back, the left centre back and the left back. 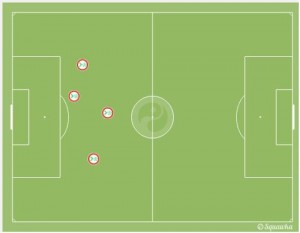 Ashley Young
Our undoubted outfield player of the season, in perhaps our biggest game of the season came up with a goal and two assists… in a Manchester Derby!!! It is the stuff of dreams for nearly every red Mancunian and United fan around the world. A lot of credit must go to Louis van Gaal obviously, this turnaround would not be possible without him, but a hell of a lot of credit needs to go to the player himself. I have called out many a player over the past few years but I am happy to say that I was not one of those people who slated Young. Some of the abuse… and that’s what it was… that the lad had to put up with for nearly two years from large sections of the United fan base was vile, and now they are the ones hopping up and down and singing his praises. Yet through it all, Ashley Young has conducted himself with the upmost dignity. He should be an inspiration to everyone, not just in football but in everyday life. He didn’t bite back at “fans” who name called his partner, he didn’t bite back at “fans” who hurled abuse at his ability, and now that he is playing the football of his career he isn’t hitting back and saying “I told you so” when even I wish he would. Any other footballer/sportsman would have been favouriting two years worth of tweets and throwing them back in people’s faces right now, as we saw from Andros Townsend recently. Not the gracious one though. When it comes time to select the Sir Matt Busby player of the year, I know where I will be casting my vote.

Marouane Fellaini
Only the turnaround of one man outdoes that of Ashley Young and that is that of Fellaini. Here is where I hold my hands up. I WAS WRONG. I never wanted him at United… I never thought he was good enough. Now I can’t imagine us without him. As I stated before, this was the derby of redemption for many individuals but none more so than this man. The idea when signing him was that he was a strong midfielder who we could put in to combat Yaya Toure… well… nearly two full seasons later he finally did it, and boy did he do it in true Fellaini style. Back post header? Yes please! Steve Round (yes that one… Steve Fuck Off Round) said following the game that it was only a matter of time before Fellaini came good… no Steve, it wasn’t a matter of time, it was a matter of competence… competence in training, competence in tactics, competence in management. David Moyes could have had 10 years with Fellaini at United and we wouldn’t be seeing the Fellaini we are seeing now, so F**K OFF ROUND.

He was awful in the first part of the game, having to be bailed out by the ever impressive Chris Smalling and Antonio Valencia on a couple of occasions. Then something strange happened. In traditional Phil Jones fashion he almost made a monumental cock-up as the last man in defence, taking an eternity to allow the ball to run by him so he could turn and play the ball back to De Gea with Jesus Navas going straight at him. Well… fortune favours the brave because he did JUST make that back pass and a De Gea clearance and Daley Blind cross later and United were level. On such fine margins are a derby won or lost, and though the ends often justify the means it was definitely by luck rather than design. Admittedly after that moment Jones did look more assured and composed, further evidence that van Gaal is still shaking off the cobwebs of the tenure of David Moyes. Jones is the last of our major underachievers yet to have reached the pre-Moyesian era levels but he is getting there… slowly but surely. This past month might have just saved his United career.

Contrary to what Gary Neville thinks Wayne Rooney didn’t do all that much. On Monday night G.Nev spent 5 minutes talking about how great Rooney’s running was… he is a football player mate, he is supposed to run!!! Now when you compare what Rooney did to what Yaya Toure did for example, then yes, Rooney’s performance was out of this world, but let’s not shy away from the reality of the situation, he is there to score and create goals. Thankfully his only meaningful action of the game was to create an assist for the offside Juan Mata so it’s not like he did nothing. What you have to ask though is, if van Persie put in that performance would he have got 5 minutes to himself on Monday Night Football? I think not. I repeat what I have been saying almost weekly now… Rooney playing up front has not been the catalyst to this team playing great, Rooney moving OUT of midfield has been.

SACRILAGE!!!! I know, I know, I love him too, especially at left back. His intelligence is something I rave about almost weekly, but let us not have our love for the handsome Dutchman cloud our vision. The things that Tottenham tried to do with Townsend, Liverpool tried with Sterling and Villa tried with Agbonlahor and then Bacuna, Manchester City and Jesus Navas actually succeeded in. On a number of occasions Blind got caught high up the pitch and but for some shocking finishing/decision making by the Spaniard and some good stops by David De Gea things could have got very ugly before they even had a chance to get going. I will put it down to eagerness and getting caught up in the occasion, and truth be told in that opening 15 minutes all our defenders and midfielders were a bit all over the place, but do that against Oscar, Hazard or Willian next week and we will be punished.