Manchester United prepared for Sunday’s Premier League fixture with Chelsea in perfect fashion on Thursday night, courtesy of an encouraging 4-1 victory over Fenerbahce in the Europa League. The emphatic win puts them joint top on six points with Feyenoord in Group A, ahead of a return fixture with the Turkish club in two weeks. Of course, Jose Mourinho is clearly prioritising United’s progress in the Premier League, which is why only four of the team that faced Liverpool at Anfield on Monday night made it into Thursday’s starting XI.

As such, it should be all change again for the game at Stamford Bridge. Mourinho will be desperate to avoid defeat against a team that he brought so much success to, despite parting with Chelsea in such uncomfortable fashion last December. This is the first time that the club’s have met since Mourinho took charge of United, and given the high esteem that he is still held in by Chelsea’s fans, it should be an emotionally charged evening. Here’s how we think Mourinho will set out his United side: 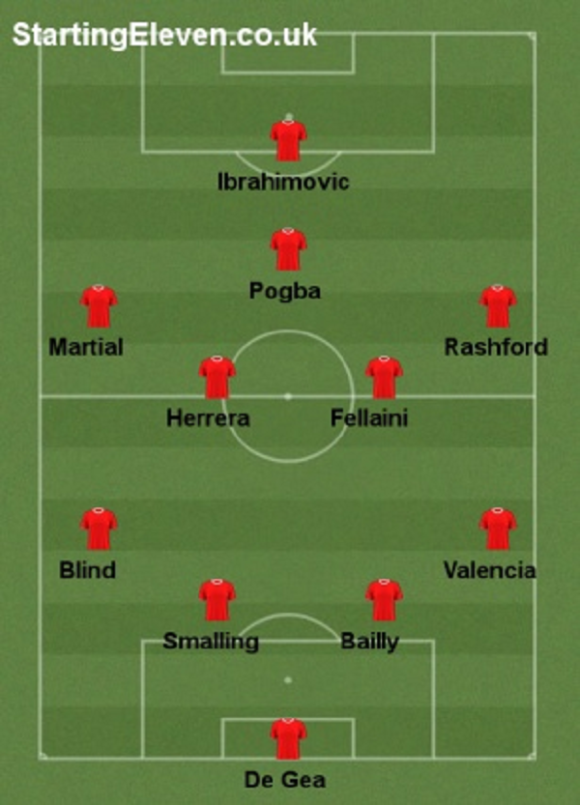 Given that Daley Blind and Antonio Valencia were completely absent from the matchday squad on Thursday night, it’s clear that they are being saved for Sunday’s game, so expect them to reprise their left and right back roles. Chris Smalling was withdrawn at half time with what his manager described as a ‘muscular injury’, but should hopefully be fit to return to the centre of defence alongside Eric Bailly. If not, Blind will presumably replace him with Luke Shaw coming in at left back.

The team’s central midfield will likely stay as it was; Ander Herrera and Marouane Fellaini took no part in Thursday’s game with Chelsea in mind, and will likely sit behind Paul Pogba, who grabbed a brace against Fenerbahce. Anthony Martial might just have done enough to earn himself a slot in Sunday’ side ahead of Ashley Young out wide on the left, but with Young rested last night, chances are he was being saved for the weekend’s fixture. Marcus Rashford watched the 4-1 win from the bench, and will likely start on the right. Zlatan Ibrahimovic wasn’t needed on Thursday, and despite several underwhelming performances in a row from the Swede, he will almost certainly replace Wayne Rooney in attack as Mourinho attempts to frustrate his former team and potentially nick a goal. Ibrahimovic will need to be much sharper than he has been in recent weeks, with his last league goal coming against Manchester City in early September.

What do you think of our starting XI? Let us know in the comments below!