Depending on who you believe Manchester United are either

A.) On the cusp of signing Barcelona star Pedro

B.) Not interested in the 27 year old at all

That’s the funny thing about the transfer window, desperate fans cling on to any piece of info in the hopes that it will see their desired player join their club and this has been the case with the Pedro transfer.

Yesterday Sport claimed that Ed Woodward had flown home from America following Manchester United’s win over Barcelona to negotiate a deal for Pedro.

Today Sport are reporting that Pedro’s move to United is being held up by the fee, with United offering €25m whilst Barcelona are asking for €30m. But they feel this won’t stop the move taking place and have gone as far as photoshopping the Spaniard in a United shirt on the cover of today’s paper. 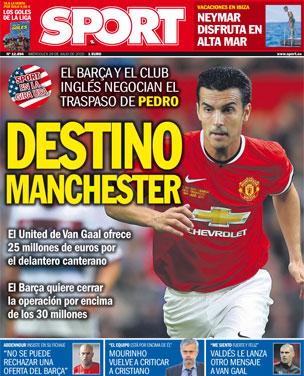 But it seems Sport are the only people that think this, because various other outlets are reporting that no deal is being struck and that United and Barcelona aren’t even in contact!

TV3/Catalunya Radio are claiming that whilst Pedro does want to leave and Barcelona are aware of this, the European are not in negotiations with United at all: 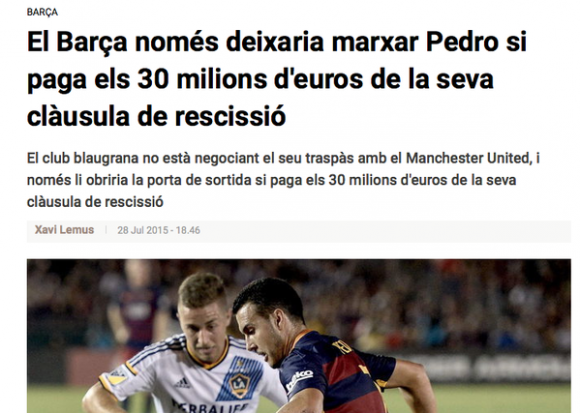 Add to that former Barcelona president Joan Gaspart told radio station COPE that as well as De Gea staying at Man United and Ramos staying at Real Madrid, Pedro would remain at the Nou Camp this summer.

Does anyone actually know what is going on? We get the impression that this saga will drag on for quite a while!