Manchester United midfielder Marouane Fellaini could reportedly be set for a move to the French Ligue 1 with Paris Saint-Germain seemingly keen on his signature. The Belgium international has been earmarked as a potential replacement for Thiago Motta, who could leave on a Bosman during the summer.

According to Le 10 Sport, h/t The Star, Unai Emery’s side have stepped up their pursuit of the former Everton man, who has been reluctant to prolong his stay at Old Trafford. Fellaini has already turned down two offers from United to prolong his contract beyond the summer, and it appears that he has made his mind up for a move elsewhere, despite Jose Mourinho’s public plea to commit him to a new contract.

The 30-year-old started the season in a relatively good fashion by contributing four goals during the months of August and September. However, since October, he has struggled with a recurrent knee problem, and this has restricted him to just three Premier League starts this term.

Fellaini is obviously looking for a long-term contract at Old Trafford, which is highly unlikely with his trailing age, but Les Parisiens seem prepared to offer him a four-year deal on an annual package of around £5.4m after tax. 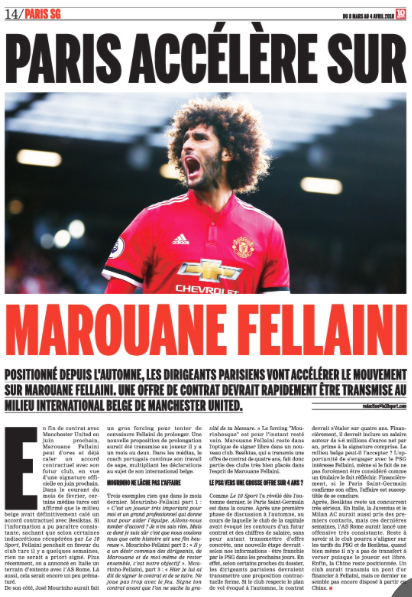