Manchester United made hard work of getting past Zorya Luhansk in the Europa League on Thursday night, only beating the Ukranian side by a solitary second-half strike from Zlatan Ibrahimovic. Jose Mourinho rested several members of his preferred starting XI, but United still struggled to create chances, and despite dominating possession, they struggled to replicate the fluidity and attacking prowess that saw them smash four goals past Leicester City on Saturday.

With that in mind, and with the impending international break after this weekend’s round of Premier League fixtures, Mourinho will almost certainly put out his strongest side to face Stoke City at Old Trafford on Sunday lunchtime. Here’s how we think United will line up: 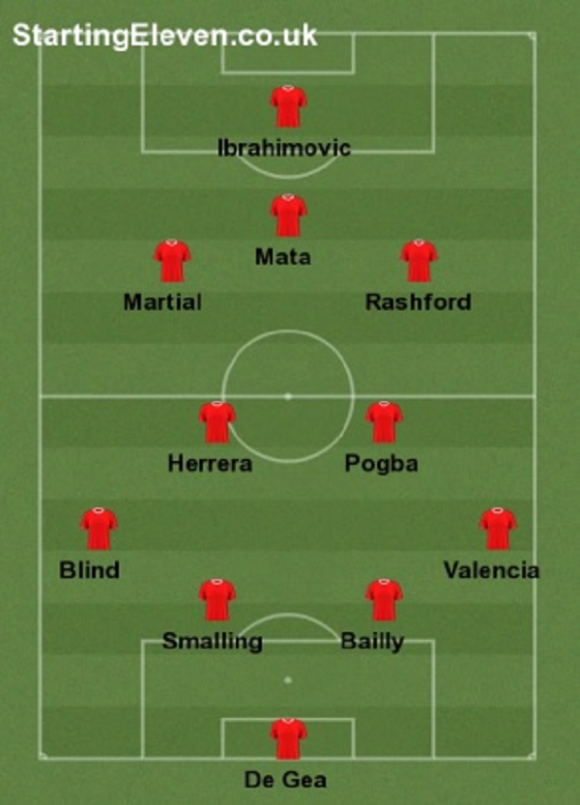 David De Gea will return to goal having been rested on Thursday night, with Sergio Romero getting his second outing of the season. The defensive partnership of Chris Smalling and Eric Bailly is unlikely to be altered given Stoke’s famously physical approach, but Daley Blind will likely return at left back having impressed in the role this weekend. Antonio Valencia will replace Timothy Fosu-Mensah at right back, most likely.

The drive and quick thinking of Ander Herrera was lacking against Zorya, and having provided Paul Pogba with the platform to enjoy his best game of his United career to date, expect the Spaniard to slot into midfield on Sunday alongside the Frenchman. Herrera has impressed in a more defensive role of late, and it’s been especially impressive to see him help bring out the best in Pogba.

Anthony Martial made his return to the side having missed the last two games through injury, and the French attacker should be restored to the starting line-up. Jesse Lingard hasn’t been awful by any means in the last week, but Martial needs to play his way into form, and the more opportunities he’s provided to do so, the better. Marcus Rashford should start on the opposite wing.

Juan Mata might not have had his most effective game on Thursday night but the Spaniard will likely still be preferred to Wayne Rooney in the number 10 role, with Zlatan Ibrahimovic, who grabbed his fifth goal of the season starting up front. The Swede hasn’t hit incredible heights so far this season, but as the goal against Zorya proved, he still has plenty in the way of predatory instincts in front of goal.

What do you think of our line-up? Do you agree? Disagree? Let us know in the comments below!