With Robin Van Persie leaving for Fenerbahce this week, Manchester United are in the market for a new striker and whilst Edinson Cavani has been mentioned, I think most United fans will be a lot more excited by this latest striker linked with a move to Old Trafford!

Having already raided Bayern Munich for Bastian Schweinsteiger, Manchester United are set to return to Bavaria this time to snap up Robert Lewandowski.

The Polish forward only joined Bayern last summer, scoring 25 goals in his debut season, but that hasn’t stop his agent Cezary Kucharski talking up a move away.

“Robert is one of the most valuable strikers in the market… He is a better player every year and plays on an ever higher level. This is very important for other clubs because he guarantees at least 30 goals a season.”

“I believe that there must be a very high offer, definitely higher than €50m.”

United have shown that they are willing spend big in order to get back to the top of English football and with Bayern also looking at Angel Di Maria, it seems like a match made in heaven.

Even Bild seem to think so, with the German paper discussing the possibility of the move too.

This isn’t the first time Lewandowski has been linked with United, with Sir Alex looking heavily at the 26 year old prior to his move to Bayern. 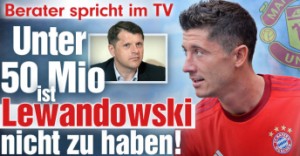