It was written in the stars that Pedro would score the winner in tonight’s European Super Cup against Sevilla.

With the game tied at 4-4, the 28 year old was the quickest to react to a Messi’s follow up to a blocked freekick and swept home from close range to make it 5-4.

Initially there was an outpouring of joy from Pedro as he celebrated wildly, but with the game won and the trophy to be lifted, his mood changed.

As you can see from this picture, Pedro is more subdued as the rest of his team mates celebrate a 4th trophy in this calendar year.

Is resigned to leaving, having told the club he would like to be allowed to move? Likely to be his last significant contribution to the club, you can see why he would be pretty sombre. 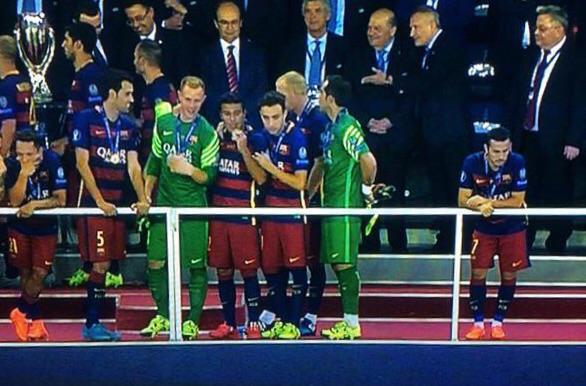