Manchester United make the trip to Staffordshire to take on Mark Hughes’ Stoke City in Saturday’s late kick-off. The Red Devils have been comfortable in the opening stages of the campaign with three successive wins in the Premier League.

However, Stoke could present a new challenge owing to United’s recent record at the Bet365 Stadium. The Mancunian giants have not tasted victory in their last four outings at the Potters’ home ground, but Mourinho will have his sights on ending this run.

Mourinho has deployed the regular 4-2-3-1 formation since the start of the campaign, but he could be tempted to match Stoke’s three-at-the-back setup. Here’s an alternative lineup he could deploy… 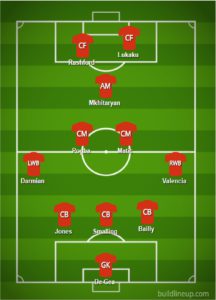 With three in central defence, Chris Smalling would be the obvious choice to partner Phil Jones and Eric Bailly. Victor Lindelof has made the bench in recent games, but Mourinho will probably offer him more time to adapt to Premier League football.

Antonio Valencia has done his job credibly on the right side of the backline, and he could comfortably slot into the right wing-back spot. However, Daley Blind could be replaced with Matteo Darmian, who is more comfortable in the left wing-back role.

Similarly to the goalkeeping position, no changes are predicted in midfield. Juan Mata could be the attacker to make way to facilitate the formation with Henrikh Mkhitaryan to start in his preferred number 10 role.

The Armenian has already amassed five assists in the Premier League, and he appears to have finally settled in Mourinho’s team. Up front, Marcus Rashford looks a likely contender to part Romelu Lukaku owing to his brilliant form for England.

Rashford bagged two assists and a goal – including the vital winner against Slovakia, and he looks to have found his touch back after his initial struggles this season. Lukaku, on the other hand, added four goals to his tally during the World Cup qualifiers for Belgium, and he has now scored eight times for club and country this term.