Manchester United defeated West Ham United in their own backyard in the Premier League on Saturday. Next up, the Red Devils will face RB Leipzig in the Champions League tomorrow night.

The Old Trafford outfit defeated the Germans 5-0 earlier in the season and now, a draw will confirm their place in the next round of the competition.

As far as the team news is concerned, Solskjaer may make a few changes to the squad that started vs the Hammers at the weekend.

The likes of Anthony Martial and Edinson Cavani suffered injuries and the duo should be out of the contest vs Leipzig. In such a scenario, Marcus Rashford and Bruno Fernandes, who started on the bench on Saturday, could return to the XI tomorrow night.

Ole might utilize a three at the back lineup and in such a scenario, Maguire, Lindelof and Tuanzebe could start in the backline. On the other hand, Wan-Bissaka and Telles should play in the wing-back positions. De Gea, if fit, would return in the goal.

With Fred out suspended, the likes of Paul Pogba and Scott McTominay may retain their starting positions in the central midfield.

Fernandes should play in the No.10 role behind two strikers, Greenwood and Rashford, the duo found the net vs West Ham at the weekend. Here is Man Utd’s strongest possible 3-4-1-2 XI vs Leipzig: 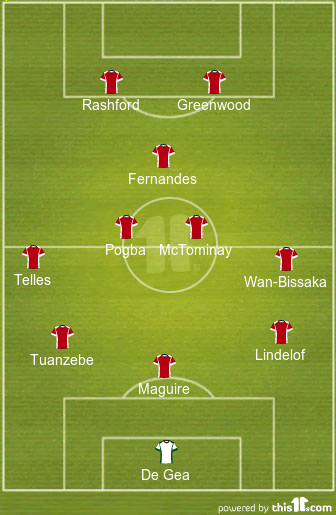