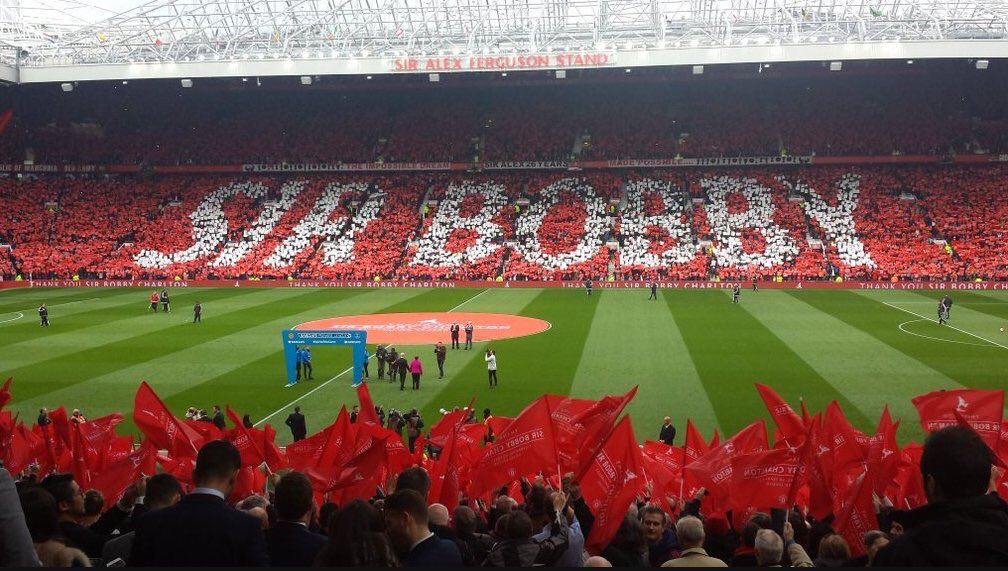 I’m not old enough to have seen Bobby Charlton play professional football for Manchester United, although he did play in a charity match before a game at Old Trafford in the very early nineties.

Then in his mid-fifties, my only recollection of that match was Charlton collecting the ball in the centre circle, driving into the opponents half and rasping a thirty yard drive into the net. Granted, the goalkeeper he faced was an MP, but it was still a breathtaking few seconds. Charlton played 758 times in all competitions for United, scoring 249 goals, which is pretty damned impressive considering he wasn’t an orthodox striker, and he remains (just) the club’s top goalscorer. He won three league titles at the club, plus an FA Cup and the 1968 European Cup, as well as the 1968 Ballon d’Or and the World Cup with England. All but one of those titles were won after he survived the Munich Air Crash, an event which profoundly affected him.

All who know Charlton sing his praises as a man, painting the picture of a quiet, thoroughly decent and principled human being, one who thoroughly deserved the honour of having the South Stand at Old Trafford named after him. In terms of influence, honours and longevity there are few players in the club’s history who can match him and who aren’t still too freshly retired to warrant such a gesture. And yet, in the build up to yesterday’s stand unveiling, prior to the Everton game, some of the disrespect for the man on social media was quite appalling. The basis for it, it seems, is some sort of short-term Mourinho-lust, the current malaise at the club overwhelming any sense of history or decency in a minority of the club’s fans. It is well known that Charlton opposed the appointment of the Portuguese in 2013, although his thoughts on the matter now are not on public record. Even if he were still opposed on moral grounds and that opinion, along with the agreement of Sir Alex and David Gill, were creating a form of administrative stalemate at United, whose fault is that? Is it the fault of an old man with a perfectly valid opinion or a club structure where cancerous owners and their play-dough faced lacky are unable to make a decision on the future of Louis Van Gaal or who should replace him? Ferguson, Charlton and Gill should no longer have any influence at the club, not because they are bad human beings, but because the biggest clubs employ people for the express purpose of making footballing decisions free of emotion and self-interest. Not that there is any self-interest at play for Charlton, more a personal dislike of the antics of Mourinho in the past. Given that the deeply distasteful Carneiro affair played a significant part in his exit from Chelsea, can you blame an intrinsically good man for having doubts? It is this writers belief that the Portuguese is the only viable option for the club right now, but I can’t damn Charlton for thinking otherwise. More people than than I’d like need to get their heads out of Mourinho’s ar*e and show some respect for a club legend who appears to be taking the blame for the failings of the Glazers and Cuddly Ed.

As for the game yesterday it’s hard to muster much enthusiasm for dissecting it in any depth. United won a dreadful game by producing the one move of quality in a sea of tedious bilge from both sides. Schneiderlin’s long diagonal ball to Mata on the right wing was magnificent, as was the Spaniard’s control and ball inside to Marcus Rashford. The 18 year old back-heeled to the on-rushing Timothy Fosu-Mensah and his low cross was converted at the far post by Anthony Martial. Everton hit the bar and Jagielka shot straight at De Gea from close range, but ultimately the visitors ran out of steam and United got an important three points. It changes little. It was still a demonstration of why Van Gaal should be gone in the summer, although for once the Dutchman got his substitutions spot on. Rojo had an appalling first-half and was justifiably withdrawn for the outstanding Fosu-Mensah, whilst Carrick also struggled and his replacement Ander Herrera immediately gave United energy, creativity and drive in midfield. Daley Blind was probably the best player on the pitch, totally nullifying the in-form Romelu Lukaku, whilst Martial and Rashford also impressed in isolated patches. That save from Jagielka aside, David De Gea again had little to do, which is a welcome change both for him and the fans.

Still, it was a tense encounter right up to the final whistle and United rarely win easy these days. It was a victory which broke the cycle of Van Gaal, where excellent victories against high-quality opponents are then undone by turgid defeats in games a top side should be winning. Everton have an excellent away record and so this was never going to be a walk in the park, but Van Gaal’s side got the job done, just. It sets things up nicely for the trip to White Hart Lane next week and the run of four home games in five matches after it. With Bournemouth, Villa and Palace to come at Old Trafford, as well as a Leicester side who may already have won the title, with a fair wind United could still snatch the fourth Champions League spot. That we even give consideration to whether or not that is desirable is a product of the total disillusionment some have with Van Gaal’s turgid reign at Old Trafford. It should be remembered that despite four wins in five league games this is still the worst Premier League campaign points and goals wise that United have experienced. You get the impression that Woodward is desperate not to have to sack the man on whom he has hung his hat and fourth place could facilitate the maintenance of the status quo, regardless of the numbers. That Fergie and friends have mobilised in the last week or two to argue the case in favour of Ryan Giggs or Mauricio Pochettino shows that Van Gaal is on the edge, something which the manager admitted himself in his pre-match press conference. It was left to Teddy Sheringham, one former Red on the outside of Fergie’s tent looking in, to point out that Giggs needs experience elsewhere before taking the top job. Of course, there’s no point in getting angry with Sir Alex or Bobby Charlton for contributing to the ongoing confusion and in-fighting. They shouldn’t have the power or influence to make a difference at all. For that we have to thank the Glazer’s and Ed Woodward, the men who should be the focus of your ire.