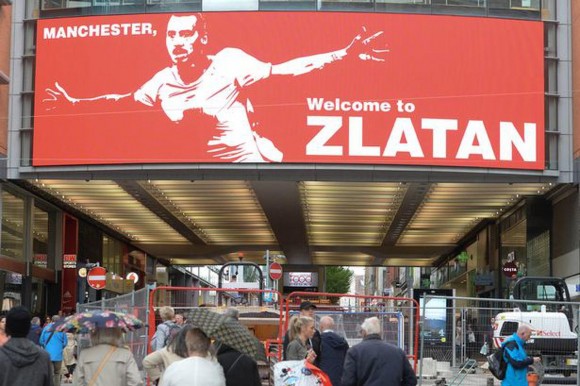 Project Fear was the name given by the ‘Leave’ campaign and its supporters in the recent United Kingdom Referendum on membership of the European Union to ‘Remainers’ who predicted economic strife and a return to recession should the nation vote to exit.

The belief was that these were simply scare tactics, designed to put the fear of God into voters, compelling them to retain the status quo. Surprisingly, the U.K. voted in favour of leaving the EU anyway, and within hours all of the dire warnings offered by myriad economists, the ‘experts’ that Michael Gove told us all to ignore, began to come to pass. Project Fear was always, for those who would listen, Project Reality.

A week later and another Project Fear is in operation in Greater Manchester. The first sign that fans of other clubs were rattled came upon the appointment of Jose Mourinho as manager. Rival supporters have long since ceased getting wound up about anything that has happened at Old Trafford as David Moyes and Louis Van Gaal created teams that terrified no one. You know you’re no longer relevant when fans can’t be bothered to focus their bile on you. When Mourinho became manager that all changed, as social media was awash with conspiracies and claims that the new coach is over the hill or suddenly no longer a leader of men, all based on a single season at Chelsea in a career dominated by incredible success.

Since Mourinho signed his name on the dotted line everything about the club has changed. For three years the transfer policy has been poorly formulated and executed. Problem positions have been neglected and signings have struggled to adapt to the demands of the Premier League. Looking at a squad of moderately talented nice guys, half of whom regularly played out of position, was terrifying for no one. Neither was the sight of Executive Vice President Ed Woodward, ditherer extraordinaire. Oh how the critics must have laughed as Renato Sanches was whipped away from United’s clutches by Bayern in two days after United had been negotiating for months and then the club comically briefed that they’d never really wanted him anyway.

But everything has changed. Suddenly United look to be a slick transfer unit with direction and a clear idea of where reinforcements are needed and the standard they should be. Eric Bailly was signed early at centre back in a deal that was kept under the radar, and this week Zlatan Ibrahimovic and Henrikh Mkitaryan have followed. A centre back when one has been needed for three years, an experienced top class centre forward to fill the void as Marcus Rashford is developed into a player capable of spear-heading a title winning team and a right sided attacking midfielder with a bit of pace and lots of dynamism and creativity. No more Juan Mata wading through treacle as United attempt to counter-attack. Now the club have immersed themselves in a chase to sign Paul Pogba, safe in the knowledge that if it purely comes down to money then they will surely win. Perhaps the Frenchman has other ideas, but the fact that it is even a possibility is putting the wind up an awful lot of fans. Whilst United have milked the signing of Zlatan, for example, Twitter is awash with supporters of other flavours desperately trying to persuade the world how far past his best he is, whilst Liverpool fans have posted cute statistical comparisons which they believe show how much better Saido Mané is than Mkhitaryan. Mourinho has instigated Project Fear II and it is having the desired effect. United have stopped passing sideways on the halfway line and are now going straight for the jugular.

Rival fans should also take note of the players Mourinho is looking to sell. First to be told of his fate was reportedly Marcos Rojo, a hopelessly inadequate defender signed in schoolboy fashion by Van Gaal after a decent World Cup. Now it seems likely that Juan Mata will join him in exile, possibly to ambitious Everton for a fee in the region of £25m. The Spaniard is a wonderful technician and an even nicer man (hugs), but his lack of pace and inconsistency have been a problem ever since United signed him as a vanity project in a position they already had covered. Moyes’ season was circling the drain and Woodward saw an opportunity to measure his genitals. Moyes was in no position to turn down high-class players and took him in an obscene £37m deal. On his debut the Spaniard lined up at Stoke alongside Wayne Rooney and Robin Van Persie and promptly lost, abjectly, to two Charlie Adam goals. It was a sign of things to come. There have been memorable contributions from Mata, particularly at Anfield, at home to Manchester City and in the 2016 FA Cup final, but too often he has flattered to deceive, too inconsistent to ever hold down a permanent first team birth.

United can no longer afford to be nice, to have a squad full of wonderful human beings who just aren’t nasty or talented enough to create a unit strong enough to achieve the club’s goals. Mourinho knows that and is working hard to rectify it. Rival fans can see that too and p*ss is starting to boil across the nation. There can be no sentiment or hearts ruling heads, no letting personal relationships get in the way of the job at hand. No better example of this was the Portuguese’s decision to reject Ryan Giggs as a senior member of his management team. Giggs left United this week after spending most of his life at the club, the most decorated player in its history and a truly legendary player who created memories that those of my vintage will never ever forget. The romantic side in all of us loved the idea of Giggs as manager of Manchester United, the next progression in the fairytale that has been his professional life. But after serving two failed managers as an assistant and with United in need of enormous rebuilding and restructuring he was never the man for the moment. Mourinho knew that he coveted his job and decided to break the umbilical chord.

It was a decision, like Mata, like Ibra, Mkhitaryan and Bailly which makes sense when emotion is removed from the equation. Mourinho is making the decisions that Moyes and Van Gaal were too afraid to make or were simply not able to see needed making. This new era of logic and direction has opposition supporters afraid. Project Fear II is in full effect, and again the world will be well advised to listen.