Manchester United already have one foot in the final of the Europa League after beating Roma 6-2 in the first leg of the semis. The Italians need more than a miracle to oust the Red Devils tonight.

As far as the team news is concerned, the Old Trafford outfit published the confirmed starting XI for Liverpool before the game was postponed (Man Utd). We can expect a few changes in that line-up.

David De Gea has mainly started ahead of Dean Henderson in the Europa League and the Spanish shot stopper should get the nod to feature vs the Giallorossi.

Solskjaer can afford to make certain changes because Man Utd have a healthy lead and therefore, Eric Bailly could return to start with Maguire in the central defense. In the center of the park, the likes of Fred and McTominay should start.

Up front, Greenwood was selected vs Liverpool but Cavani should be given the nod to start in the second leg vs Roma after his man of the match display in the first leg.

The England international could feature on the right flank in place of Marcus Rashford, who should be rested for tonight’s fixture.

The teenage sensation should start with Bruno Fernandes and record signing Paul Pogba in the attacking midfield. Here is Man Utd’s strongest possible 4-2-3-1 XI vs AS Roma: 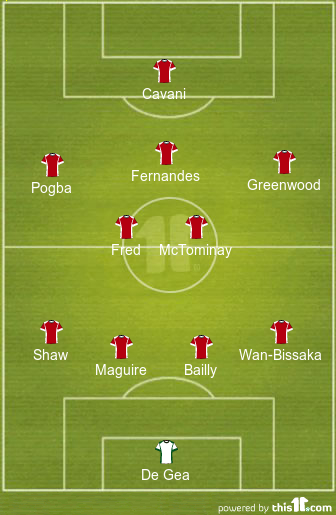